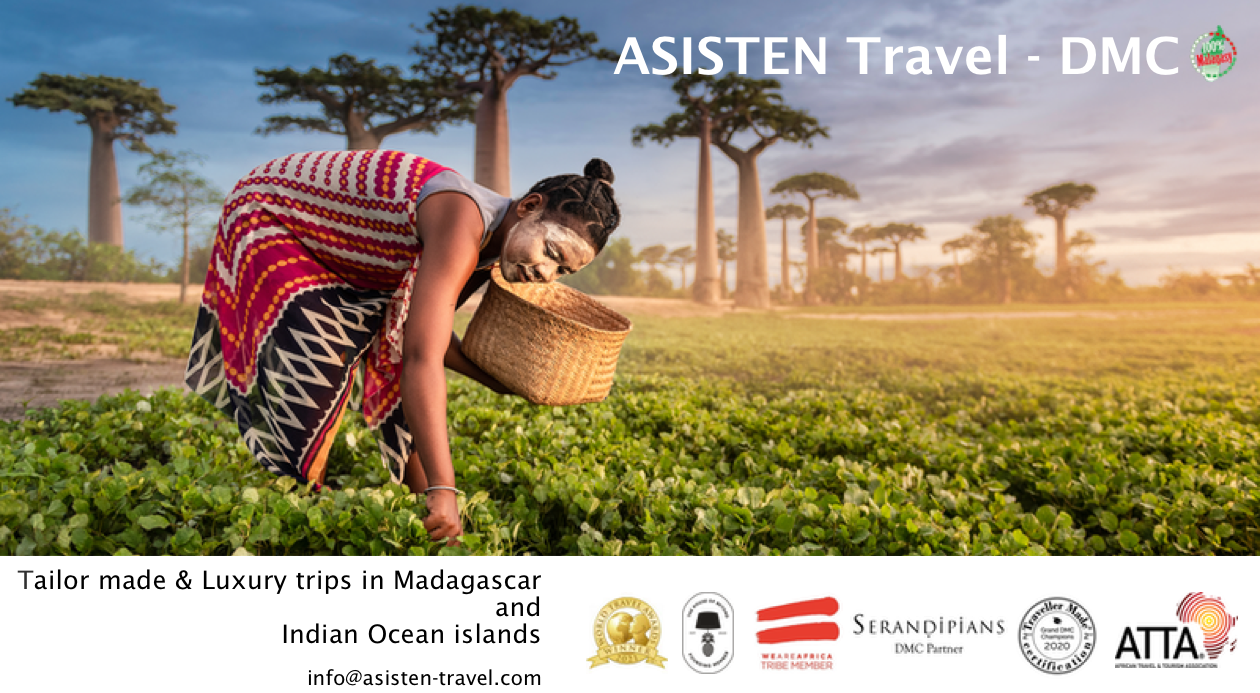 Madagascar, officially the Republic of Madagascar . The nation comprises the island of Madagascar (the fourth-largest island in the world), as well as numerous smaller peripheral islands. Following the prehistoric breakup of the supercontinent Gondwana, Madagascar split from India around 88 million years ago, allowing native plants and animals to evolve in relative isolation. Consequently, Madagascar is a biodiversity hotspot; over 90 percent of its wildlife is found nowhere else on Earth. The island’s diverse ecosystems and unique wildlife are threatened by the encroachment of the rapidly growing human population and other environmental threats.

Initial human settlement of Madagascar occurred between 350 BC and AD 550 by Austronesian peoples arriving on outrigger canoes from Borneo. These were joined around AD 1000 by Bantu migrants crossing the Mozambique Channel from East Africa. Other groups continued to settle on Madagascar over time, each one making lasting contributions to Malagasy cultural life. The Malagasy ethnic group is often divided into eighteen or more sub-groups of which the largest are the Merina of the central highlands.

Until the late 18th century, the island of Madagascar was ruled by a fragmented assortment of shifting socio-political alliances. Beginning in the early 19th century, most of the island was united and ruled as the Kingdom of Madagascar by a series of Merina nobles. The monarchy collapsed in 1897 when the island was absorbed into the French colonial empire, from which the island gained independence in 1960. The autonomous state of Madagascar has since undergone several constitutional periods, termed Republics.

Madagascar is an exceptional destination thanks to the highly varied types of tourism possible here, organized around main interests. These include: the seaside, the range of water sports, nature conservation, adventure sports and the discovery of both country and regional culture and traditions.

1 | A SMALL CONTINENT ON A VERY LARGE ISLAND

The wealth on offer means that Madagascar cannot be confined to simple clichés, and has its place among leading travel choices. From the swell of the Indian Ocean to the calm of the west coast, from the northern ‘arrowhead’ to the almost perfect ‘bow’ of the south coast, no two sites are alike. In terms of civilisation, the Malagasy have also succeeded in cultivating the diversity handed down from their distant migrant roots, which sometimes makes the Great Island a mystery country lying somewhere between Africa and Asia. That’s what is so intriguing, attractive and seductive about it.

Madagascar’s leading tourist product is nature, 80% of the wildlife and 90% of its plants being endemic. We can choose birdwatching to illustrate the excitement it can generate, as minority niche tourism for very specialized enthusiasts. Birdwatchers may travel long distances – there is a Friends of the Madagascar Fody Club in the United States – but they know what they want, and will find it in Madagascar. They observe, take photos, list, record and are not bothered about going out into the forest at night. When the passion for nature has you in its grip!

3 | A LAND FOR SUSTAINABLE TOURISM

Should we thank erosion? In one sense yes, since it has chiselled out these masterpieces known as Isalo, Bemaraha, and many others that are so many strong arguments for touring these destinations. But there is another sort of erosion which is calculated not in tens of millions of years, but in generations at risk, resulting from man’s unconsciously suicidal pressure on his own environment. Sustainable tourism is more than a passing fad and is taking action against such destruction, thanks to ethics that unite visitors and their hosts. In Madagascar it is now very present, better understood, and centres for it are springing up all over the regions.

4 | OFF THE BEATEN TRACK, ADVENTURE TOURISM

The Great Island offers sport tourists more adventure playgrounds than they could possibly want. Operators long ago identified the country’s potential and the standard of their services has improved regularly, opening even more new, natural and authentic doors to thrill-seekers. Perhaps the best ambassador to be found for this type of tourism is the Tsaranoro Andringitra, a climbing spot renowned the world over. The German climbers who were the first to take on its big granite walls in 1995 still remember the experience… 5 | SEAS FOR EVERYONE With 5,000 km of coastline, Madagascar is synonymous with vast stretches of sea with seas and coastlines for all tastes. Malagasy waters are a wealth of recreational activities for enthusiasts, from scuba-diving in some of the world’s most beautiful spots to sailing from island to island on yachts, and humpback whale-watching from July to September. Several destinations in one? So goes Madagascar and its “tourisms”. See you soon!

Meet us next at: